The service on these new routes will be operated within the third quarter of 2022 with four to seven return flights per week.

According to a statement from the airline, the announcement to launch five additional routes was announced recently at the Da Nang Investment Forum 2022. The occasion also marked Vietjet’s announcement that it will include Da Nang’s tourism symbol on its fleet in order to promote the city worldwide.

It is worth mentioning that the airline has announced plans to operate two more flights in September 2022, linking New Delhi and Mumbai with the island city of Phu Quoc.

Vietjet Flight Schedule To And From India

Similarly, the two countries’ first direct flights between New Delhi and Ho Chi Minh City/Hanoi commenced operations in April, with three to four flights per week on each route. Passengers may book tickets for these routes anytime, with one-way fares starting at just US$18.

“Da Nang is Vietnam’s one of the most attractive destinations for international tourists. Vietjet has transported nearly 22 million passengers from, to Da Nang so far and currently operates 8 domestic and 5 international routes from and to Da Nang. Vietjet believes that the new routes announced today will continue to contribute to opening more opportunities, promoting economic, trade and business investment between Da Nang and other Vietnamese cities and regional destinations.”

Da Nang is a world-famous coastal city in central Vietnam known for its stunning Golden Bridge and Dragon Bridge. It is currently also renowned as a city of modern architecture, and it has recently gained a lot of popularity among international tourists. The city also acts as a gateway to nearby tourist spots like as Hoi An, the historic imperial castle in Hue, and Quang Binh, home of the amazing caverns.

It may be noted that Vietnam has removed the COVID-19 entry rules, allowing visitors to arrive in complete pre-pandemic mode. The S-shaped country is eager to welcome worldwide visitors to discover its stunning beauty. 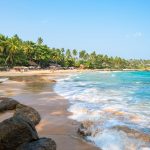